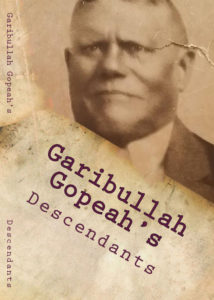 Garibullah Gopeah and his mother arrived from South Beach , Calcutta, possibly as indentured immigrants. They had traveled, to work the land, as did so many Indians, on the ship British Trident. Garibullah Gopeah’s mother, Suppeity, died the following year at the age of 26. He became an orphan in a strange country and without family. Garibullah Gopeah had nine children, all born in what is now Guyana, South America.

This is compilation of his known decendents as documented by his great grandaughter, Georgette Baker.